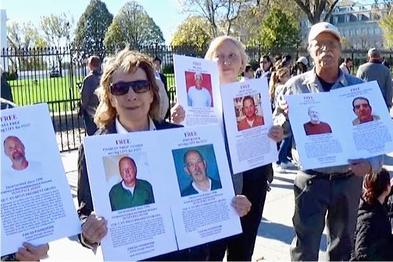 Lots of  Clemency information on The Clemency Report by Dennis Cauchon

Commentary by Mark Osler and Doug Berman about Clemency

A case for Clemency - by Chase Madar
The American Conservative

Obama's Clemency Lottery Recent news suggests President Obama is making up for lost time in pardons for imprisoned nonviolent drug offenders. Is it too little too late?

In the Mean Time Please Visit Life for Pot

When Wars End - Clemency is Granted

Grant Clemency's to End the War on Drugs

A Pivot back to Clemency

We regret to report that The Clemency Project 2014 did not fulfill the promise that was made.  The promise was for 10,000 or more, yet only 1,715 commutations were granted by President Barack Obama.  Thousands of nonviolent drug offenders petitions for commutation were inexplicably denied.

Sally Yates was the Assistant Attorney General and was the gatekeeper for the Clemency initiative.   Her criteria for these decisions was not disclosed.

This is not to say that those who were granted commutations were not good candidates, but it is unfathomable to us why some offenders with priors and violence in their charges were granted and so many nonviolent offenders were denied.

Clemency Project 2014 submitted 2,600 petitions to the Pardon Attorney and only 894 of these carefully vetted petitions received commutations.

Most were Charged with Conspiracy and went to Trial

In April 2014, President Barack Obama urged thousands of federal prisoners to apply for executive clemency and they did.  At least 35,000 prisoners have applied for mercy, but only

2 in 100 have been granted.  Most of the petitions have not been processed.

Recently White House Officials have put their focus on reentry assistance.  While reentry is an important issue for anyone leaving prison, it does not address the fact that we have at least 2,000 federal nonviolent offenders serving life without parole.  In 2013, Jennifer Turner of the ACLU authored Life Without Parole, A Living Deaththat identified a demographic of inmates who received egregious sentences, yet are not a significant risk to public safety.

this industry.  We also know there are thousands of people in prison who deserve a second chance.  Thousands who without clemency will only leave  prison in a pine box.

A systemic approach for granting this relief should not be ignored.  The vast majority of this demographic were sentenced under unduly harsh drug statutes.  They have no hope of release without clemency.  Their sentences are never addressed in proposed legislation, new law or Bureau of Prison administrative resolutions.

If the pace of Commutations does not increase however, the legacy of compassion

and mercy will not be apparent.  The promise was made for thousands and those

chosen to have a second chapter of their lives.  There needs to be a pivot back to

clemency to fulfill the promise.

incarcerated individuals are making remarkable efforts to be examples of success

and achievement.  In this way they are the best ambassadors for the brothers and

sisters that they left behind.  The most positive legacy they could have is to

home to families and friends and begin to rebuild lives and relationships.  They are

doing this, thus paving the way for what was originally promised and planned for.


Pivot back to Clemency Mercy and Compassion

For these reasons we should continue to push for the clemency that was promised to those without hope for relief.  It is still not too late to consider a more systemic approach for granting this relief.

The ACLU released a paper shortly before Clemency Project 2014 was announced.  Within that report was a perfect demographic for inmates with egregious sentence whose release would not present any significant risk.  That report was titled Life without Parole a living Death.  In that report, Jennifer Turner identified 3,278 nonviolent inmates in the United States serving life without parole.

Included in that number were 2,074 nonviolent offenders serving life in the Federal system.  Although some of them were serving this sentence for property crimes, the vast majority of them received these sentences because of our ill-conceived War on Drugs.  They will have no hope without clemency.  Their sentences are not addressed in any of the pending legislation for reform, nor are BOP administrative resolutions likely to be a remedy.

The Systemic Solution – A Suggestion

1.  Grant clemency to those nonviolent inmates serving life without parole who were

identified in theACLU’s report who have served 10 or more years.

2.  Our best estimate is that most of the inmates in this category were charged with

a plea.  Thus, it is reasonable to assume that they had no violent charges dropped,

but had sentencing enhancements.  This is what we have found with almost all of

the  nonviolent drug offenders with life sentences that we have vetted.  For this

reason, the inmates that would be released are no doubt not violent.

3.  After looking at the charges and sentences of those offenders who have been

Mark Osler from St. Thomas School of Law has frequently written about group or category clemency.

In November of 2012Michael Kennedy and David Holland submitted a Group Petition for Commutation for 5 elderly marijuana offenders sentenced to life without parole after being charged with conspiracy and electing to go to trial.